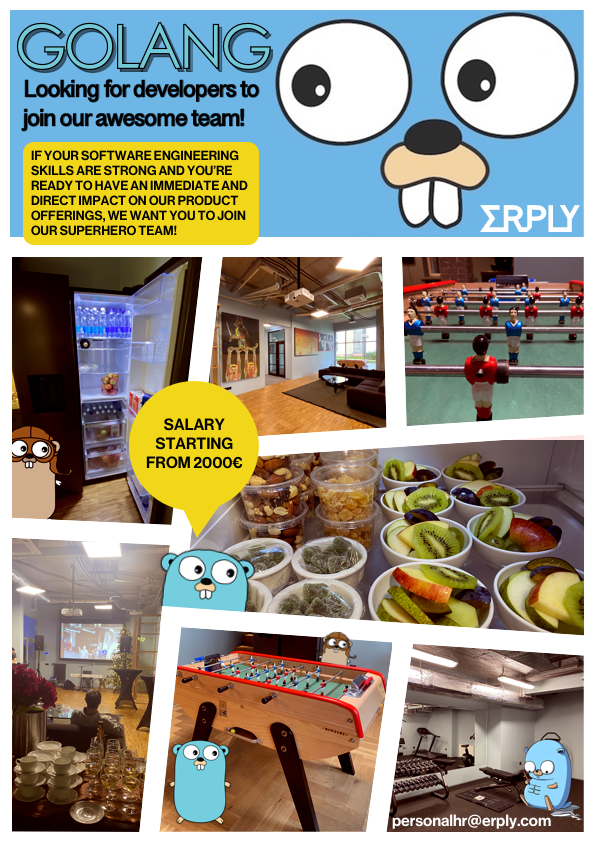 What do we expect

As a Go Developer for Erply, your primary focus will be on developing Go packages and programs that are scalable and maintainable. You will ensure that these Go packages and programs are well documented and have reasonable test coverage. You use best practices and frameworks. Essential requirements include collaborative problem solving, sophisticated design, quality product delivery with API documentation and last but not least test coverage

Strong knowledge of Go programming language, paradigms, constructs, and idioms
Knowledge of common Goroutine and channel patterns
Experience with the full site of Go frameworks and tools, including:
Dependency management tools such as Godep, Sltr, etc.
Go’s templating language skill would be an asset
Go’s code generation tools, such as Stringer
Popular Go web frameworks, such as Revel, Gin
Router packages, such as Gorilla Mux
Ability to write clean and effective Godoc comments and Swagger output
Familiarity with code versioning tools (such as Git, SVN, and Mercurial)

Our company is built on innovation, efficiency, and determination. At our core is a team of passionate, results-driven individuals who take pride in their work. We work hard to create a supportive learning environment and ensure that your voice is heard. Our executives, developers, support team, salespeople, marketers, and analysts are constantly learning and growing together. With over 120 global employees, offices across the globe, and over 10 languages spoken within the company, we’re always excited to add new talent to our growing team.